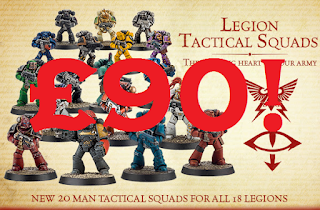 So, this week's Forgeworld newsletter proudly announced that they're doing 20 man tactical squads now for the somewhat uninspiring cost of £90 (which for those of us who think logically means £4.50 a marine!). Looking at the price I had to ask myself - is this really even a deal.

With that in mind I did a bit of maths calculation. It's worth noting that all of these sets are based around the Betrayal at Calth plastic Mk IV marines, so that was easy to calculate. The other parts included in the sets ate 10 resin legion specific heads, 20 legion shoulder pads and 5 torsos. 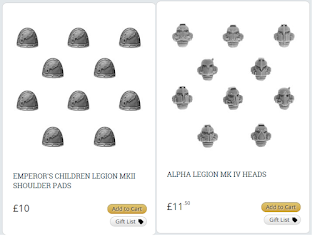 Using the prices on Forgeword and the GW webstore, it was easy to deconstruct the box set as follows:

Overall, the total cost if bought separately comes in at a fairly underwhelming £103. Meaning that there is a saving of £13 here, or to put it another way, you essentially get the torsos for free. 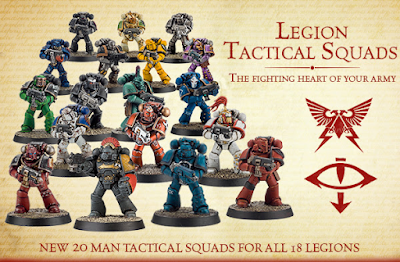 Well, I like money, so I'd stick with the Calth box set personally and just buy any upgrade sprues separately. The value in these new Forgeworld sets isn't that bad and there is a small saving to be made, but it isn't exactly the deal of the century.

Posted by Blazmo at 10:30:00
Email ThisBlogThis!Share to TwitterShare to FacebookShare to Pinterest
Labels: Betrayal at Calth, Budget Wargaming, Forgeworld, Reviews