The article that answers the question nobody asked - what would it be like if British celebrity chef Jamie Oliver played 40k?

When I sat down with imaginary Jamie earlier this week he was already hard at work on yet another Land Raider.

"Some people like to paint with a brush, some with an airbrush, I don't like it" With those words he began applying a liberal coat of Kantor Blue with a kitchen sponge, before topping the tank with battle damage achieved with lashings of foie gras.

I was impressed with the performance of his own brand blender in making basing material from spare sprue. He insisted on saying "Wazz it up" constantly, throughout the process. Jamie then bases his models on a chopping board so they look extra "delish".

"The trick to a good space marine is to overcome the bland flavour of the plastic with something more exciting" Jamie declared, before rubbing raw chilli liberally over the model and dusting it with paprika. "a little olio and jobs a good 'en!" 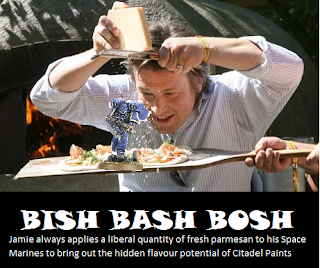 Unfortunately the interview was cut short as Jamie was summarily executed for Heresy... 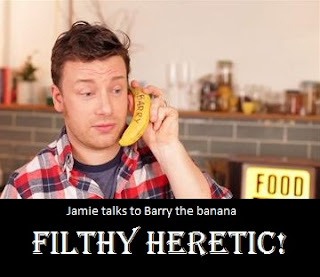 If anyone actually reads this leave a comment below with who you'd like to see next in this exciting series of articles you've been fortunate enough to stumble upon!